Last day in Germany and we let kids sleep in until 8 As we did not have breakfast club. Wasn't that nice of us coaches. After breakfast boys B n girls train while boys C prepare for their first GM. Although a 10:30 start it is once again very hot with temps in the upper 90s.

Boys played great n won 2-1 with two goals from Austin Baechle. They are feeling great as they should. Lunch followed by another training session, our last one in Germany. We cut training short n head back to lake for some fun and we spend 2 hours there. Back to sportscenter to start packing n cleaning as the World Cup final is on our agenda.

Pizza, ping pong, n games are on tap as we wind down. Kids are almost half n half on Spain or Holland but I've picked Spain since the beginning and for once I pick a winner. GM over and we pack the bus and say goodbye to our hosts. They were fantastic and we had a blast.

I've never spent so much time in the former East Germany and we all learned so much about what went on as it was fascinating. I captured a lot of info on the video camera so you all might enjoy it.

We are now on the bus to Denmark and the kids are sleeping so I think I'll join them. Next stop is Denmark and as I end this the radio is playing "On the Road Again." too funny. 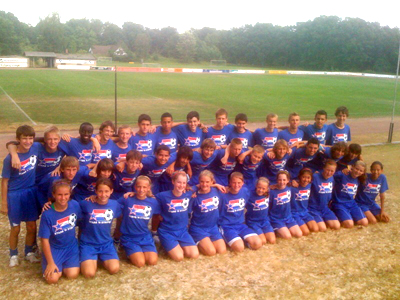