Preparations for Final - got to a computer for a few minutes so I thought I would give you some more info on what is going on here in Dana Cup.

First of all the accommodations as we have 10 Girls in one room, 10 Boys A in one room and 7 Boys B in one room and 7 Boys B in another room. We are sleeping on mattresses and I think we are all out of Fabreeze, darn it.  We are planning on a laundry night in Sweden on Sunday night and looking forward to a private shower and bed.  We shower at the swimming pool, which is where most of the kids are right now but it closes at night before we come home. We have to squeeze in showers in the mornings and during the day when we can.

Frederickshavn is a small quaint little town with friendly people.  A typical European downtown, everyone walks including us, our legs are as strong as they will ever be as we average 4 - 8  miles per day walking to and from meals, showers, games, fields, town, etc.  The downtown has a walking street, no cars allowed, that is lined with shops, food vendors, outdoor markets, etc, and it is a great town.

Food here has been fantastic and no complaints, except for the kids who are spoiled and are not forced to eat breakfast at home, shame on you parents who do that.  They eat all 3 meals and then are only allowed to have certain snacks. No junk food right now and some of the boys had to throw away their recent purchases for not following in these categories. Girls are better with the junk food but are more picky with the meals. I have to encourage them to eat everything and they are managing quite well.

Nighttime is the most entertaining as the kids are socializing in the halls with other kids from other countries and having a ball. The girls traded with another Swedish team last night and are wearing their new stuff today.

Off to lunch as we prepare for the Finals which should be great. Rain on and off today so the field might be muddy but we are ready.

Wish us luck. Will try and get update to you all ASAP after the game.

Text message again (12 messages) as I have no access to computer. Day started off with breakfast then a walk through town followed by some great time in the public indoor pool. All are preparing for the Boys A Final game and it is raining cats and dogs. Final is set for 4:15pm but due to other games in lightning delays, we sit in the stadium locker room for 90 minutes. Great atmosphere and the boys are jacked.

We finally start the game but the slick conditions hurt our precision possession game. The girls and Boys B are singing songs and chanting as they have a spirit battle with the Norwegian fans. Our opponents are from Norway and they are huge. They win most of the high balls and dominate the first 20 minutes. It it wasn't for 5 or 6 superb saves from Connor, the game would have been over in the first half.

After our nerves settle down, we begin to generate some better play and create our first real chance as Emmet gets a chance at the corner of the box. A quick fake and he chips the GK in the upper corner and the place goes wild!

With the wet conditions, the boys all slide with celebrations. Great fun.

We now play with more confidence and control the rest of the first half. 2nd half starts off with with SnS on the attack and although still a bit sloppy, we keep their chances to shots from outside the box.

With the final whistle, the fans rush the field and the excitement of winning the cup can be seen on all faces. A great achievement for these boys as they truly played above their abilities and played like champions.

Everywhere we walk we are given ovations from all. Really cool.

We had a great week. Speak to you from Sweden.

POD was Connor and the Dana Cup also voted him the Man of the Match! 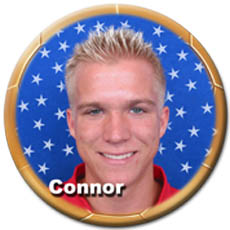 Dana Cup Man of the Match